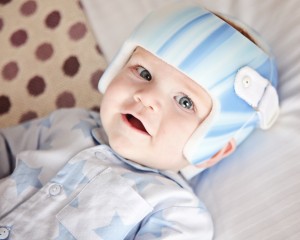 Dr. Rachael Veronesi, a Northern Beaches Chiropractor, sees a number of young children at her Neurobalance Clinic who have Plagiocephaly, a condition often considered as cosmetic.It is also referred to as ‘flat head syndrome’ and can arise in the womb, as a result of a traumatic birth, orby sustained pressure on an area of the baby’s head, caused, for example, by constantly laying in one position or, spending long periods in a car seat.

However, as Rachael points out, research has highlighted that the effects are not solely cosmetic and that there is a link between functional delays, (both motor and cognitive) in affected children. She states that early screening is advisable to identify any problems and make any interventions that are necessare. The types of associated problems that she sees in her Brookvale Chiropractor clinic range from visual field defects, frequency and persistence of Otitis Media, (an infection of the middle ear), dysfunctions associated with auditory processing and delays in hitting those developmental milestones that parents and paediatricians look for.

As more parents become aware of the potential for any functional or cognitiveproblems that could affect their child in the long-term, more are seeking help from qualified practitioners such as Dr. Veronesi. Getting an initial assessment of plagiocephaly is a good first step to take so, call Neurobalance Chiropractic now on 02 9938 5456. You can be assured that Chiropractic care for this condition can be successful in the correction of both functional and cosmetic problems that arise from plagiocephaly.

What To Expect From Chiropractic Treatment

Dr. Veronesi reports that many parents are, quite understandably worried about the prospect of Chiropractic treatment for their baby or young child. Right from the start, she is able to reassure them that the techniques used are so gentle,they are safe even for newborn babies.

For correction of any cranial asymmetry, (asymmetrical head shape caused by plagiocephaly), cranial bone remoulding is a gentle and effective treatment that many infants can sleep right through!

Where problems with the neck muscles (torticollis) are causing a child to favour turning the head to one side only and resulting in a flattening of the side of the baby’s head, very gentle manipulations of joints and muscles restore full movement. Try pressing gently on your closed eyelid for a moment – this is a good representation of the amount of pressure that would be needed to treat a baby effectively!

Tips To From Your Chiropractor You Can Use At Home

Chiropractic care does not end with your appointments at the clinic. Brookvale Chiropractor,Dr. Veronesi will discuss a number of things that parents can do at home, to help their child. These include simple things like ‘Tummy Time’. Even for as little as half a minute, three or four times every day, this can make a big difference in motor coordination and cognitive development as it stimulates the muscles in the upper neck.

She says that she finds parents are pleased to be able to be pro-active in helping their child. In addition to the relief that they feel when they see for themselves that the Chiropractic treatment is not only effective, but is also safe and gentle, they are hugely relieved that they are doing the very best for their child’s functional and cognitive development. To find out more, contact your Northern Beaches Chiropractor today on 02 9938 5456.