The magic of pregnancy

Did you know that as many as 80 percent of pregnant women experience pelvic pain? Pelvic pain mostly happens in the final trimester where the baby drops into the pelvic region in preparation for labor although it can also happen at any point in the pregnancy even after delivery. Many pregnant women complain about the pain which normally range from minor ache to serious debilitating sensation around the back down to the belly. The searing pain is just hard to pinpoint and that some midwives and doctors are unaware of the condition so most pregnant women endure the discomfort believing it will just go away after childbirth. 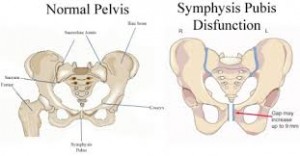 Pelvic pain is most commonly known as Symphysis Pubis Dysfunction or SPD. It is also known by many names like pelvic girdle relaxation of pregnancy, pubic symphysis separation, pubic shear (a term used in osteopathy), separated symphysis and more. Symptoms of SPD vary from person to person although pregnant women reported that the pain comes on as early as 12 weeks and lingers even after labor. The pain is often described as bizarre and excruciating, and makes simple movements like walking, getting out of bed, or lifting one’s leg difficult. Symptoms of the mild form of SPD may include:

The pelvis bone is a circular bone that leaves a small gap in between but is connected by fibrocartilaginous tissue reinforced by ligaments. This midline cartilaginous joint is called the Pubic symphysis hence the name of the condition. This area, along with the sacroiliac joint, is important during the pregnancy because it helps the pubic bone to move freely and expand allowing the baby to fit easily. Pregnancy hormones called Relaxin are released by the body to loosen the ligaments and make it more flexible. However, excessive levels of Relaxin make the pubic symphysis too stretchy and relax which can create weird sensations on the pelvic area.

The pain in the pubic area can be managed and eventually resolved and treatments from an experienced medical practitioner may suggest the following in order to cope with pelvic pain in pregnancy:

Any pain felt around the pelvic area should be reported immediately to your midwife, doctor or obstetrician because early intervention can help any pregnant women lower the pain to a minimum as well as avoid any long-term discomfort and pain. Seek help when pelvic joint problems arise to your trusted physiotherapists to help relieve or ease the pain.